We are delighted that out audience award will be sponsored for the first time in 2021 by the Authors Licensing and Collection Society.

The award follows an online vote by anyone who has had the opportunity to hear the festival entries.

Voting opens at the conclusion of the listening sessions.

New for 2021; our first ever micro drama awards. During the mornings of the festival week, we invite producers, writers, directors and other creatives to come together to make new 20 second audio dramas “to wash your hands to”.  Collaborating across national and linguistic boundaries, we are looking forward to some brilliant new work. Go to https://www.eventbrite.co.uk/myevent?eid=142489807851 to register. 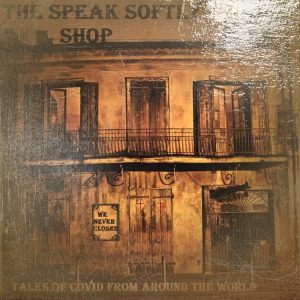 Welcome to The Speak Softly Shop. This cycle of short form audio dramas created by producers across the globe in response to the Covid 19 pandemic is available to everyone to enjoy in the Works section of the website.

These pieces have been created during the pandemic and under unusual, sometimes secret recording conditions. They are a testimony to the power and versatility of audio drama, and the determination of their makers. There will be new work too, so come back whenever you fancy. The Speak Softly Shop never closes.

We are sorry to have to announce that the festival will be postponed until the autumn and will not take place next week. Please get in touch if you have any questions or if we can help with travel cancellations. However, in this time of social and community isolation, audio drama will be a vitally important art form so watch this space for news of how we intend to use it to bring light into all our lives over the next few weeks and months.

We're delighted to announce that our jury chair for 2020 is Jack Klaff.

Jack has worked in radio as an actor, presenter and writer for half a century. His radio roles have included Elgar, Wilde, Spode, Macbeth, Oberon, Byron, Jung, JFK, Neil Armstrong, The Count of Monte Cristo, The Sea Wolf and Quasimodo.
Jack’s readings have included Phantom of the Opera, Tynan’s Diaries, several JM Coetzee novels, The Alexandria Quartet and The Bluffers’ Guides. He has presented for LBC, Radio London, Radio 3 and Radio 4.
As a radio writer, his credits include radio sketches, talks and dramas, including his solo show Nagging Doubt.

His awards and nominations have included the Jack Hargreaves Prize for Innovative television, a Golden Rose of Montreux, a Herald Archangel for his one-man-shows, two Fringe Firsts, a Tinniswood for Radio Writing and two Sony Silver Certificates for Radio Acting.

We are delighted to have a jury chair who brings such a breadth as well as depth of experience to the role and are looking forward to some stimulating discussions.

If you'd like to attend the festival, please book a free ticket through Eventbrite.

76 entries are a lot to go through... but we're almost done!

While you wait for the programme to be announced, have a look at the 2019 Festival Report, or at the lovely map of countries that have entered this year's festival.

The jury have voted – and the audience too!

Congratulations to “Travelling in Africa” by Georgian Public Broadcasting!

"This is amazing play! Come on Everybody, listen to it and you will get what I mean.”

The UK International Radio Drama Festival is the first major international radio drama festival to go paperless. Each year, we print, transport and recycle some 75000 sheets of paper, providing participants in the festival with access to English language translations of the works in other languages and written scripts in English of the works in that language to support participants whose first language is different. Those translations and texts are a vital part of the festival, ensuring that everyone is able to enjoy the plays they are hearing to the full.

This year, our festival is breaking new ground and going paperless. With the generous support of festival entrants, we are providing participants with e -readers, pre-loaded with the scripts. The e-readers will remain the property of the festival to protect authors’ rights and to ensure that casual drop-in audience members and fully committed jurors alike have quick and easy access to the translations.

Announcing the move, Jonathan Banatvala, the Festival’s Artistic Director said: “A paperless festival has been an ambition since we first started five years ago. It’s a very different approach to that used by most festivals but – just as we were the first to provide access to the festival plays online and to introduce an audience award – we are also very proud to be making this innovation. It’s clearly important that an international festival does everything it can to keep its carbon footprint low.”

We are delighted to announce that Jonathan Keeble will be chairing the jury for the fifth UK International Radio Drama Festival. Jonathan combines his audio work with a busy theatre and TV career. He has featured in over 700 radio plays for the BBC appearing in everything from Shakespeare to Sherlock Holmes to Dr Who as well as playing the evil Owen in The Archers. Much in demand for his voicework, this ranges from the Voice of God in the Sistine Chapel to The Angel of Death in the film Hellboy 2 with all stops in between. A multi award-winning narrator, Jonathan has recorded over 600 audio books.

Making the announcement today, the festival’s Artistic Director, Jonathan Banatvala said “I can think of nobody who better represents the breadth and depth of radio drama than Jonathan Keeble. It has been my privilege to work with him as an actor on a number of projects including our first bilingual piece and I know at first hand how fully Jonathan understands radio drama as an art form and how much he appreciates the limitless possibilities it offers. I am delighted that he will be joining us in this fifth anniversary year to chair our jury.”

This year’s theme – celebrating our fifth anniversary – takes as its theme “your best ever work” and has attracted over 60 entries ranging in length from a couple of minutes to a full hour.

Entries come from national broadcasters and from independent producers and span a wide range of genres. Listening sessions take place throughout the day from Monday – Friday. We listen together in glorious mono, recreating the experience of the 1 million plus daily UK audio drama listeners, many of whom enjoy their audio drama in the car or in the kitchen. Listening sessions are free and members of the public are very welcome on a drop- in basis. For those who cannot make it to Canterbury, all plays included in the festival are available to hear via our website. An English language script is available to live and online listeners for all plays; reading in English whilst listening in another language is an experience very similar to watching a film with
subtitles.

The festival jury makes two awards – for the best full- length entry; and the best short form (under 7 minutes). In addition, anyone who has heard the work may vote for the “audience award” in an online poll. The jury is made up of professionals and audience members; anyone who can commit to the full week of listening is welcome to put themselves forward to join it.

Speaking about the festival, its Artistic Director, Jonathan Banatvala said:
“This is a very special festival. It constantly surprises and delights me - whether that is a perfect two minute gem or a totally immersive hour long soundscape. But it is the opportunity for everyone – professional or audience member alike - to talk to each other about the work they have made or heard over a cup of tea which makes it so unusual.”

In addition to the listening events, we will be welcoming Gillian Reynolds , Radio critic of The Sunday Times, to an evening in conversation with Kate Chisholm of the Spectator at Waterstone’s book store on Wednesday 20 March at 6.30pm.

We are delighted that this year’s festival has sponsorship from the Writer’s Guild and the Authors Licensing and Collecting Society . We are very grateful for their support.